Brief Description: Inspired by a previous Fun Family Science program, the second edition features even more experiments the entire family can enjoy together.

As with the first Fun Family Science program we ran, this was designed as a “set your own pace” event. Families were greeted at the entrance to the program room with a set of instructions for 6 different experiments. Families could then decided which experiment they wished to start first, and the order in which they would do the experiments. Included with the instructions were different activities and discussion questions that the families could reference for each experiment.

Each experiment was set up on a table scattered throughout the room. Some experiments, like the Mini-Volcanoes, were meant to be done at the experiment station. Other experiments, like the Build Your Own Wind Power card, were meant to be taken to a separate table to work on. To accommodate these varied arrangements, we had the stations ring the outside perimeter of the room, with space to walk around and work at the stations, and tables in the center of the room for families to sit at when working on the more in depth experiments.

The six experiment stations were:

-Make Your Own Silly Putty

-Tornado in a Jar

-Make Your Own Wind Powered Car

-Make Your Own Silly Putty

There are many recipes for silly putty online, and we used  Pagingfunmums.com’s recipe as the basis for our recipe. We reduced the size of the recipe to a smaller amount, and used washable school glue, which worked just fine for us. This was an experiment where families created it at the station, and we lined the floor under the table with a plastic tarp in case things got messy. We also kept plastic baggies on hand for families to store their finished silly putty in.

For this experiment, we lined the tabletop with a plastic liner and had all the

ingredients for a baking soda and vinegar volcano laid out. Families were given a small jar- a baby food jar- to use as their volcano. To erupt their volcano, they placed it in a long shallow plastic bin (think of those under the bed storage bins), to contain the mess. For a little extra pizzazz, they could put food coloring into the vinegar.

-Tornado in a Jar

Our Tornado in a Jar design was based off of several online examples: Kidspot.com’s Tornado in Jar Experiment, Weatherwizkids.com’s Tornado in a Jar, and Coffeecupsandcrayons.com’s Tornado in a Jar Science Experiment. For ours, we used a mason jar to spin our tornado in, and we gave families the option to hot glue the lid of the jar in place, so the tornado did not unexpectedly turn into a flood. We used glitter, water, and dishsoap for our volcanoes; some examples add vinegar, too. The jars turned out neat, but the glitter did not swirl as much as we would have liked. Families still had fun swirling the jars, though! 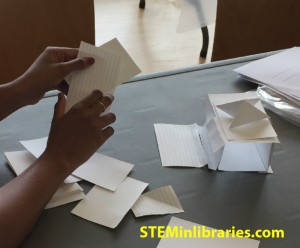 For the structure trio, families had three different building challenges to try. The first was building structures out of small plastic cups (shot glasses purchased from the dollar store); the second was building a structure with toothpicks and mini-marshmallows that could hold a plate of pennies; and the third was tobuild a structure using nothingbut index cards. Families enjoyed the variety of materialsand the challenges each one presented.

For this experiment, we set up a long shallow plastic bin (another under the bed storage bin) filled with water on a table, with a tarp underneath the table. Families had to build a boat out of tinfoil that would float in the water. For a further challenge, they could add pennies to the boat and see how long their boats stayed afloat with the extra weight.

-Make Your Own Wind Powered Car

The idea for this experiment came from a picture in this blog post: Classroomquests.com’s Family S.T.E.M. Night at the Castle. Families were given a baggie of supplies and attempted to build a car that they could move by blowing on it. 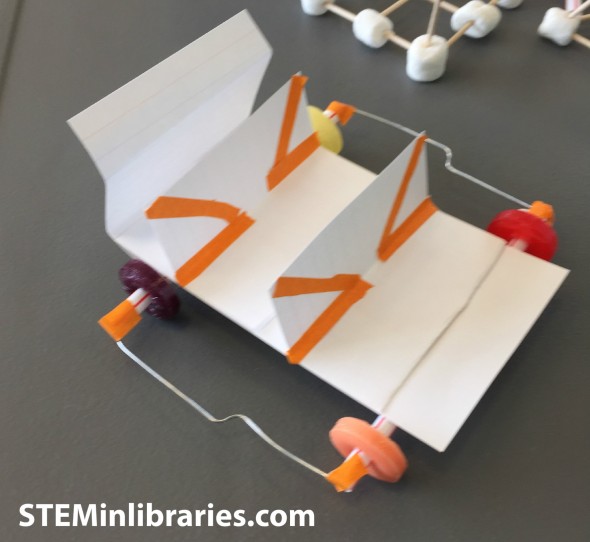 Tornado in a Jar

Weatherwizkids.com’s Tornado in a Jar

This was one of those wonderful rare programs where everything went exactly right. Each experiment station ran smoothly, there was no unexpected issues, nor even any unexpected messes. Families were completely engaged in each experiment, and there was lots of lively discussion and experimentation, especially with the more open-ended experiments like the Wind Powered Car and the Structure Trio Challenge. As everything went extraordinarily well, there is nothing that we would recommend changing.

Many of the experiments from this program can be used as parts of other programs. We have used both the Structure Trio idea and the Build a Boat Challenge in programs for children in grades 1-3.

The open-ended experiments- the boats, the car, and the structures- would lend themselves well to an older crowd of both Tweens and Teens, as the challenge aspect is particularly appealing to the age group.

Additionally, as those same open-ended experiments were so popular with families, a new program could be created that focused only on those experiments. Based on our observations, families could very contentedly work on those three experiments for an entire program.