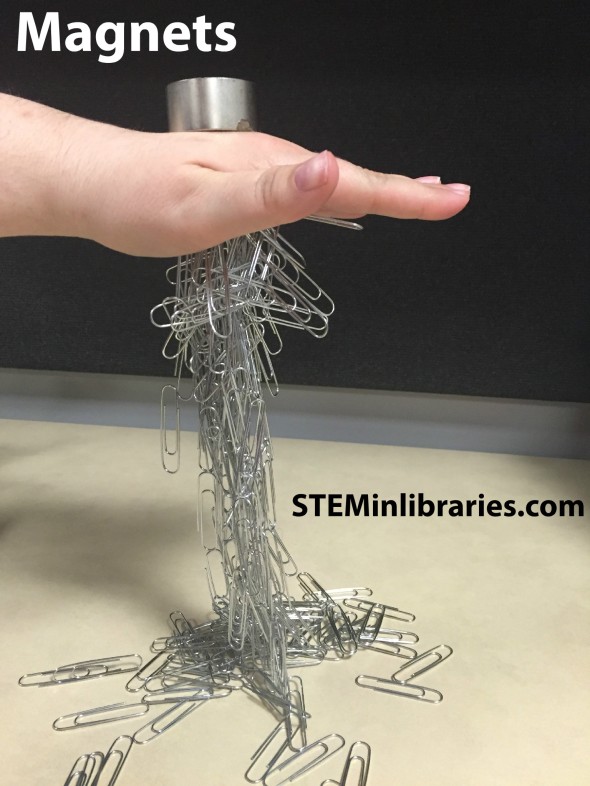 Brief Description: Learn about the forces that make magnets work, and try your hand at a variety of fun magnetic experiments.

Test tube that fits into the mouth of the water bottles

2. Break attendees off into groups.

3. Rotate groups between experiment stations until end of the program.

Note: Both Ceramic and Neodymium magnets break easy. Be sure to stress that participants must be careful and gentle when handling magnets.

This experiment was inspired by a large and very powerful magnet that was given to us. It use to reside in a defective DVD unlocker, and our maintenance department, knowing we had an upcoming program on magnets, rescued the magnet from the device and gave it to us. The magnet was strong enough to pick up paperclips through a hand.

For our experiment, we placed the strong magnet in the palm of participants’ hands, and had them wave their hand over a pile of paperclips and see how many they could pick up. Because of the strength of the magnet, we had a librarian oversee the table and ensure that kids were careful and safe in handling the magnet.

Inspired by a Magnets Going Through Copper Pipe by Technology News on YouTube.com, we purchased an Eddy Current demonstration kit. We had the kids handle the Eddy Tube over a padded bowl to prevent the magnets from breaking when they exited the copper tube.

We discovered this experiment in the book Return of Gonzo Gizmos: More Projects & Devices to Channel Your Inner Geek by Simon Field

This was an exceptionally messy station, and an experiment that did not work as planned. We suspect that the strength of our magnets was too weak to be successful. While some changes were observed in the Ferrofluid, the coffee stirrer did not lock in place as described.

We used both Get the Iron out–of Your Breakfast Cereal; Bring Science Home: Activity 15 by Katherine Harmon on Scientificamerican.com and Science Projects for Kids: Magnets and Metal by the Editors of Publications International, Ltd. on Lifestyle.howstuffworks.com for this station. It was another messy station, with cereal exploding all over the surrounding area. Unfortunately, despite the mess, the experiment did not work as planned, and there was no discernible trace of iron to be found. We were uncertain if our magnets were weak, or our cereal was bad.

We had a variety of different magnets of shape and size available to test. Kids recorded the maximum number of paperclips they were able to pick up with each magnet. We were inspired by Magnet Science Projects on Hometrainingtools.com and Science Projects for Kids: Magnets and Metal by the Editors of Publications International, Ltd. on lifestyle.howstuffworks.com.

Despite multiple groups rotating around the stations, none tried the magnetic line on paper experiment; participants all gravitated to the cow magnet experiment. Unfortunately, despite working very well in test runs, the experiment did not go as planned in the program, with groups rarely able to replicate successful results. The participants did enjoy trying to make it work, though.

In theory, the dollar is suppose to gently move when a magnet was waved around it, and did so in trial runs before the program. However, despite many attempts, no one ever saw the dollar move during the actual program. The kids were quite earnest in their tests, in hopes of being successful, though.

From The Science Notebook Magnetism, Magnets and Electricity – Pt. 1 on Science-notebook.com. This experiment had moderate success. Some participants were able to magnetize the nail, while others had no luck.

From the book Magnetism: Experimenting with Science by Antonella Meiani. For this experiment, we attempted to lessen the magnetic field by placing material between the magnet and the magnetic object. We tried paper, foil, cloth, and foam.

This experiment might have been more successful if we had stronger magnets on hand. Kids discovered that it did not take much to negate the magnetic field of most magnets.

This was a popular and fun experiment, one of the few that worked as planned. Kids enjoyed moving the car around by waving a magnet at it.

A seemingly simple experiment, this one caused the most frustration. The concept of taping one end of the string down, and tying the other onto a paperclip was difficult for the kids to grasp, so very few paperclips flew.

Magnetism by Chris Woodford on Explainthatstuff.com

Magnets Going Through Copper Pipe by Technology News on YouTube.com

Get the Iron out–of Your Breakfast Cereal; Bring Science Home: Activity 15 by Katherine Harmon on Scientificamerican.com

Science Projects for Kids: Magnets and Metal by the Editors of Publications International, Ltd. on Lifestyle.howstuffworks.com

Magnetic Lines of Force on Exploratorium.edu

Physics in Your Wallet: Move your Money Maker with Magnets

The Science Notebook Magnetism, Magnets and Electricity – Pt. 1 on Science-notebook.com

Some programs go smoothly, perfectly as planned, and others slowly implode. This was an imploded program. While we tested the experiments beforehand, almost every experiment had complications when tried in the program. Not every group made it fully around the room, as the experiments that caused trouble created an experimental traffic jam.

If we were to offer this program again, it would be with significantly less experiments on hands. Of the ones we originally offered, we would suggest using only the following in a new program: Magnet Hands, Copper Tube Tests, Ferrofluids, Magnet Strength, Magnets Push and Pull.

The rejected experiments might work if stronger magnets are obtained.

Some of the successful experiments, namely Magnet Strength and Magnets Push and Pull, would work for a younger audience in grades 1-3. For teens, both the Magnet Hands and the Copper Tube Tests, would be of interest, as they are unique, different and fun.

One thought on “Week Fifty-Five: Magnets”