Brief Description: Half storytime, half lab in which we explore dinosaurs.

Advanced Preparation:
Print out a foam dinosaur foot template, cut it out, and trace two feet per child on thin green foam. Cut out the foot and the hole for the feet. Make 1 set per participant. 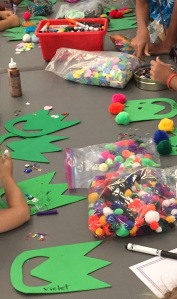 Gather dinosaur height, length, and weight information for a variety of dinosaurs. Find corresponding images for those dinosaurs, print them on white card stock, and cut them out. It may be helpful to write the dinosaur’s name on the back of each so you don’t forget which is which.

We use a powerpoint slideshow that show song lyrics and rhymes. This is helpful for parents to follow along.

2. Song: The More That We Learn Science

3. Brainstorm: What are dinosaurs? What did dinosaurs look like? (Some of them were very big, some very small–like lizards and birds). Do you know the name of any dinosaurs? Are there still dinosaurs? (No, they are extinct. Extinct means that there are no more of them on earth. They’ve been extinct for millions of years.)

4. Nonfiction Book: “How Big Were Dinosaurs?” – Lita Judge
*Note: This book is pretty long, so we skipped some of the middle pages and went directly to the T-Rex and ending pages.

5. Song/Dance: “We Are the Dinosaurs” – Laurie Berkner

6. Flannel: Dinosaur, Dinosaur, Are You Behind (Color) Door? from Thrive After Three

7. Action Rhyme: Dinosaurs of Long Ago from Perpetual Preschool

One dinosaur went out to play
On a giant fern one day
She had such enormous fun
That she called for another dinosaur to come:

Five dinosaurs went out to play
On a giant fern one day
They had such enormous fun
That they played until the day was done!

10. Action Song: All Around the Swamp (to the tune of The Wheels on the Bus) – modified from Sunflower Storytime

12. Song/Dance: The Dino Dance-O  (to the tune of the Hokey Pokey) – modified from Perpetual Preschool
*Before we began this song, we handed out pre-cut foam dinosaur feet and had parents help children slip the feet over their shoes. In the song ‘your dino,’ refers to the foam foot. So, you put the dino foot up and down, front and back, and alternately shake your feet from the left to right.*

Special Instructions and Procedures:
Make a Clay Fossil Print:
We put out a brick of Sculpey clay and an assortment of shells, twigs, leaves, and dinosaur figurines. You simply take a lump of clay off the brick, roll it into a ball, squish it flat with your palm, and then press whichever item you want into it. We recommend having the instructions for baking Sculpey clay on hand, as well as Ziploc bags so participants can easily transport the fragile clay. 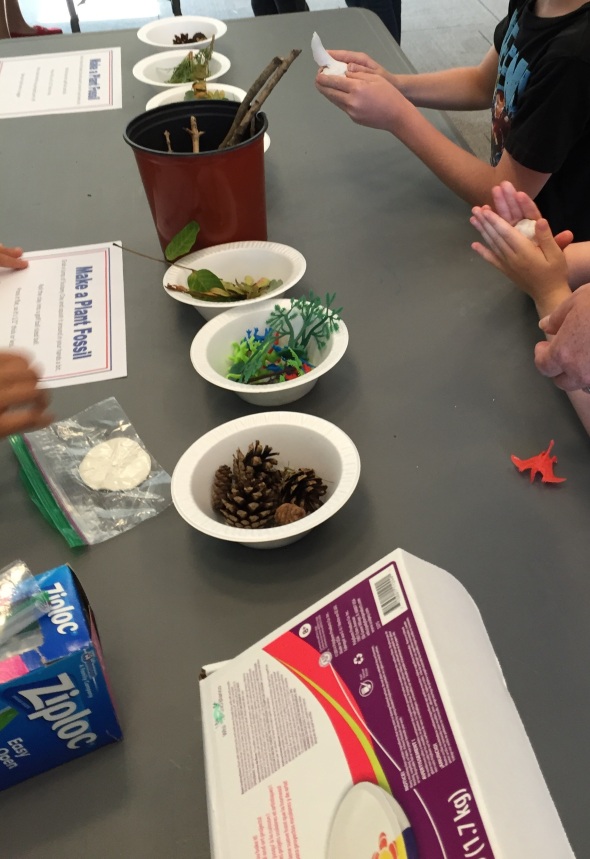 Decorate Your Dino Feet:
Put out a variety of markers, sequins, pompoms, feathers, foam shapes, glue, etc. The only objective is to ‘bedazzle’ the plain foam dinosaur feet you gave them earlier.

Dino Heights:
We used an ~18′ long piece of butcher paper and taped it to the ground. Using measuring tape and a sharpie, we marked off each foot. Using information gathered from the Dino Database, we wrote dinosaur names, heights, lengths, and weights near the corresponding foot marker and put a printed image of the dinosaur next to it. Images were found on Google, printed on white card stock, and cut out. The idea was for a child and parent to lay down next to the chart and see how big they were compared to certain dinosaurs (as well as to see how much taller or smaller some dinosaurs were than they might expect).

Thrive After Three: Dinosaur, Dinosaur, Are You Behind (Color) Door?

To the Moon and Back: Dinosaur Footprint Bookmarks

I Can Teach My Child: Dinosaur Bones

Deceptively Educational: How Big Were the Dinosaurs?

Living Life and Learning: Make Your Own Felt Dinosaurs

Strong Start: What Colour Were the Dinosaurs?

The Librarian is on the Loose: Dinosaur Story Time

Not Just Cute: Dinosaur, Dinosaur, What Time Is It?

What we would do differently:
Kids got really into decorating the foam dinosaur feet, so that station took much longer than anticipated. Coupled with the pasta dinosaur bone activity, we went well over our allotted time. Unless you plan a storytime that runs much shorter than 30 minutes, we would suggest eliminating the pasta dinosaur bone activity in favor of the much less messy clay fossil prints. That would also help draw attention to the Dino Heights station, which took a lot of work on our end, but hardly anyone had time to use.

Adaption for older/younger audience:
We did a Paleontology program for 1st-3rd graders that was a bunch of super-messy fun. Please see this post for more information. We do not currently have recommendations for aging up beyond 3rd grade.